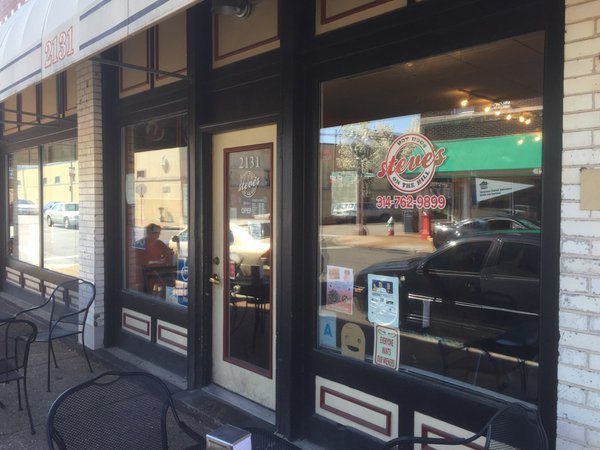 Steve’s Hot Dogs – On The Hill

When you think of The Hill in Saint Louis most people would think of fine Italian cuisine. This place will shock you or it did me.  You have to give Steve a lot of credit to put a hot dog place in an Italian district.  I guess regardless what nationality you might be, you can still appreciate a good dog.
Steve’s Hot Dog’s serves Nathan’s Frankfurters from New York and smokes them for 30 minutes. They offer several different toppings that are just as good as the dogs. Combined, they make an incredible combination.
For those of you who haven’t heard of Nathan’s Frankfurters they only sold about 425 million dogs last year and they are a publicly traded company.  Apparently, this hot dog business is BIG BUSINESS.  Steve is using only the best ingredients.
Steve’s Hot Dog’s is rated very high every place you look.  98% with one famous rating place, Google 4.6 Star, and his Facebook page is just about as busy as it gets.  7843 Facebook likes, 1190 have rated it and 5133 visitors.  I will not bore you with anymore details.  I think his Facebook page speaks for itself until you visit and try their 1/4 lb., smoked, dogs.  Moist and full of flavor.  They offer Fitz’s products, which is always a treat.
The place is clean and the staff is friendly.  It’s in the heart of The Hill, so it’s a great place to make a small get away in order to try Steve’s Hot Dogs on The Hill.  It’s impressive that Steve took something so simple and obviously figured out how to do it better.  While it is new, 2 1/2 years, the popularity of the place is soaring, evidenced by his Facebook page.  Steve is also known for his role as lead singer for the famous St Louis band, The Urge.  Steve is obviously one of those guys that will succeed at whatever he does.
Update as of February 14, 2015.  Steve has added an additional location at 3457 Magnolia Avenue, Tower Grove, MO.  Phone
I stopped in a couple of weeks ago and the quality remains consistent.
They are located at 2131 Maconi Avenue, St. Louis, MO.  Phone 314-762-9899.
KSDK video – Sept 22, 2011.
St Louis Restaurant Review RECOMMENDs this place and congratulates Steve and his staff on a job well done.  We give them a 4.5 Star Rating.
We originally published this post on April 3, 2014, revised and republished it February 14, 2015 and April 22, 2015.
Post Views: 83
Share
Facebook Twitter Pinterest Linkedin